Beyond the Ship's Log: Writers Showcase
September 10, 2017, 3:00pm
@ The Word Barn, Exeter, NH
There is a $10 suggested at-the-door donation. RSVPs are strongly encouraged.

More than detailing a voyage in a ship’s log, those called to the sea for work or for leisure have long found creative inspiration in the salty breezes, the swelling waves, and the thrill of nature’s embrace. Capturing the spirit of one’s adventures with the written word has always been, and continues to be, the perfect means for preserving a memory, chronicling a life, sharing a lesson or reliving an adventure.

Spend the afternoon traveling alongside these local writers as they share their experiences and sea-inspired poems, blogs, and essays. Refreshments will be served.

The Writers Showcase will feature:

Sarah Anderson, poet and freelance writer
Sarah Anderson is a published poet and a high school English teacher. She has a BA in English from Skidmore College and an MFA from the Warren Wilson Program for Writers, where she studied poetry. Before earning her graduate degree, she attended the New York Summer Writers Institute, The Breadloaf Writers Conference, and the Five Powers of Poetry Conference for Teachers. Her poems have appeared or are forthcoming in various journals, including Hamilton Stone Review, The Oakland Review, Off the Coast, The Café Review, and December Magazine, and she was a recently a finalist in contest run by The Pinch Journal.

Nicholas Brown, columnist
Nick has more than 25 years of experience in the maritime industry, including Naval service, tug operation, production boatbuilding, and museum work, and has written extensively about boats and the waterfront. For five years, Nick wrote a weekly column called “On The Waterfront” that appeared in the Portsmouth Herald,. Nick was also a contributor to Cross-Grained and Wily Waters, a definitive book on the maritime history of the local Piscataqua region, and has had several articles appear in WoodenBoat magazine.

Kate Garaffa, blogger and author of “Knot Working” and “The Katie Anna”
One of Kate's first sails was Day One of a twelve hundred mile journey to Key West, FL with her boyfriend. Enlisted as the blogger of the journey, "Knot Working" turned out to be a hit among family and friends. After returning home from Key West, Kate's an adventure seeker turned 9-to-5er, currently working as a Website Designer in Quincy, MA. She spends her weekends either sailing the newly purchased Katie Ann or being with family--preferably both at the same time! 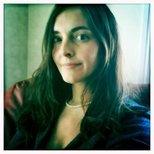