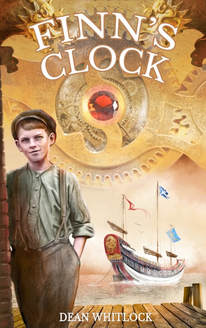 Tickets: $10 at the door. Copies of Finn's Clock will be available to purchase at the event for $10. Cash is appreciated. Those wanting to read Finn's Clock ahead of time can find it on Amazon.

Join us for a discussion with author Dean Whitlock based on his historical fiction novel, Finn's Clock. This as an event for all readers interested in history, adventure, and the process of writing.

Finn's Clock is set in a time when steam is threatening sail, when factories are displacing workers, when the immigrants are Irish–unwanted and under threat, but determined to make their place here. It’s 1853, and into Boston Harbor sails a sea-­going Chinese junk, bearing mysteries, magic, and a firebrand named An-­Ming.

Through readings from the book and sharing period maps, lithographs, and paintings, along with some sobering facts about the Irish Diaspora, which started with the Potato Famine in 1847, Whitlock will detail how he selected the time period and place for the book and how his research into the era and setting was vital to the development of both characters and the plot. For this presentation, Whitlock has added comparative details about Portsmouth and its Irish population during the same period.

Teenagers and young adults are sure to identify with Finn and his difficult relationship with his father, or with the fiery An-Ming and her budding Victorian-style relationship with the clockmaker, Peter Jenkins. Adults will be fascinated by the author’s research and how it affected the development of both the plot and the characters.

While magic is key to the plot, the historical setting is equally important, and Whitlock has made the book as accurate as possible in its portrayal of the culture and the location. (A Chinese junk actually did sail to Boston, in 1847 and women actually did wear up to seven petticoats, weighing upwards of 40 pounds.) These are just two of many details that make the book rich and enjoyable for adults as well as teens. The book is also a coming-of-age story with plenty of action and a bit of mystery.

Beginning at 6pm, attendees are invited to tour The Boatshop at Strawbery Banke to see the progress on the current project and to learn more about the HANDS ON BOATS program.

Vermont author Dean Whitlock writes fantasy and science fiction for young and not-so-young adults. His stories have appeared in Asimov's, Fantasy & Science Fiction, and Aboriginal SF, as well as in anthologies in the US and abroad. His first two YA fantasy novels were published by Clarion Books, but now he publishes independently under the Boatman Press imprint.

An Air Force brat, Dean has lived in a dozen states and three foreign countries. A life of travel that gave him plenty of time to read in the car and now enriches his writing.